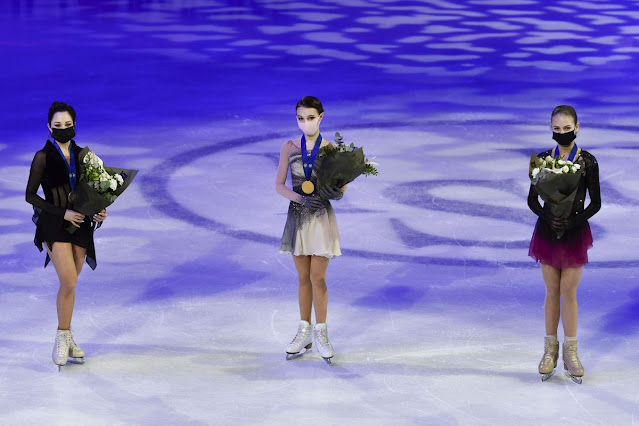 The French poet Louis Aragon famously wrote that l'avenir de l'homme, c'est la femme (the future of man, is woman), but the opposite appears to be true in figure skating.  Ever since 2010, men's figure skating has been inexorably trending towards a high-risk, high-reward quads arm race in which the judges tacitly encourage a cynical type of numbers-crunching skating thinly disguised as choreography by improperly lumping together the skaters' Programs Components Scores with insufficient differentiation.  Hence we witness certain performances by the men that consist mainly of going from big jump to big jump punctuated with certain perfunctory movements here and there (as if by random chance) not only scoring insurmountably huge Technical Elements Scores, but also near-perfect Program Components Scores as well.  True, there have been events where wonderful, soulful skating has come out on top, but for a long time, these competitions have appeared to be pleasant aberrations rather than the rule.

At long last, ladies' skating has finally followed suit during the second half of the current 2018-2022 Olympic cycle, ushered along by Eteri Tutberidze's indomitable wave of assorted Russian ladies skaters.  Undaunted by the physical realities of the post-pubescent female body, Ms. Tutberidze has revolutionized ladies skating with her emphasis on a certain type of jump technique that relies on pre-rotation, quickness of rotation, and above all, the low body weight of pre-pubescent female skaters.  Ms. Tutberidze began the revolution with the non-axel triple jumps (Julia Lipnitskaya, Evgenia Medvedeva, among others), but she has recently cornered the market on ladies' triple axels and quadruple jumps as well (Anna Shcherbakova, Elizabet Tursynbayeva, Kamila Valieva, Maiia Khromykh, among others, as well as recent Tutberidze student Alexandra Trusova).  This type of jump technique, combined with Daniil Gleikhengauz's cluttered programs utterly leeched of intangible qualities that would lend them genuine artistic or thematic heft, has dominated ladies figure skating in recent past.  All others are just trying to catch up, with varying results.  Given the high-risk, high-reward approach of the jumping arms race, the disappointingly messy, mistake-ridden ladies event at the 2021 World Championships is only a harbinger of future ladies competitions to come.  One needs only to look at the many messy men's events at the beginning stages of the quads arms race . . . 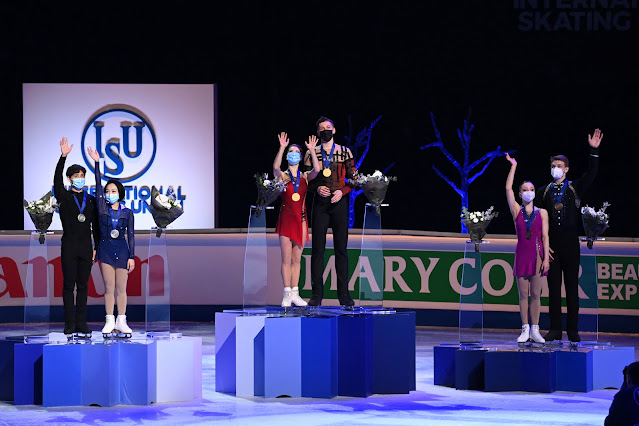 If the pairs event at the 2021 World Figure Skating Championships stands for anything, surely it would be for the golden touch of the great Tamara Moskvina in the pairs discipline.  Last season, our newest World Champions Anastasia Mishina/Aleksandr Galliamov failed to make either the Russian world or Europeans teams.  After joining Ms. Moskvina's group last spring, however, Mishina/Galliamov have looked like a wholly new team with their newfound confidence, performance ability, and improved programs.  Likewise, although Aleksandra Boikova/Dmitrii Kozlovskii faltered in the long program here, their development under Ms. Moskvina has been excellent.  It's extraordinary how Ms. Moskvina has coached world medalists in every single decade to date since Vorobieva/Vlassov in 1977.  Are we having a 'best coach' award this season?  If so, fork it over to Tamara Moskvina!  At the very least, she should receive a nomination for not only coaching two pairs to the world podium, but also breaking the eight-year Russians pairs world title drought . . .

The Apple of Averbukh's Eye 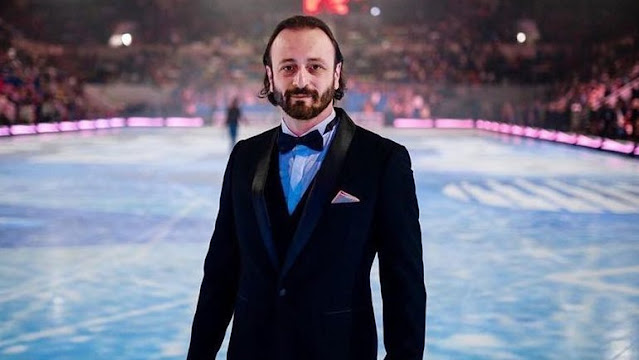 As I ventured over to Youtube to watch Mikahil Kolyada's The White Crow LP for about the 19301484th time during this famine of a figure skating season, a thought struck my mind like an ice pick to the skull: is Ilia Averbukh actually one of the best figure skating choreographers working today?

I know, to even suggest such a thing would undoubtedly condemn me as an unwashed neophyte among certain of the figure skating cognoscenti. After all, Mr. Averbukh is often remembered for his wacky interviews when not being denigrated for representing the worst excesses of early-2000s ice dance before the penitent wave of fresh, squeaky-clean Marina Zoueva teams cleansed ice dance of its sins.  I for one am not going to defend Jesus Christ Superstar or Fever.  Nor can I explain Mr. Averbukh's inexplicable decision to dump the legendary Marina Anissina for Irina Lobacheva.

But judge a man by his deeds, not his choice of ice dance partner/wife.  So let's take a look at the evidence at hand here: 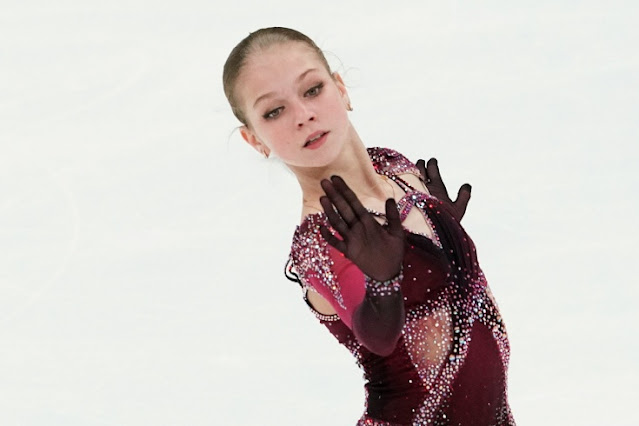 The Cold War currently being waged between Eteri Tutberidze of Sambo-70 and Evgeni Plushenko of the Angels of Plushenko has provided much fodder for figure skating-related discussion in a season notable for its paucity of skating, and the coaches' dueling Romeo and Juliet programs is certainly no exception to this state of affairs.  Both Ms. Tutberidze and Mr. Plushenko have selected not only a Romeo and Juliet long program for Daria Usacheva and Alexandra Trusova respectively, but both long programs use exactly the same music cuts, in the exact same order, and in roughly the same proportions: first, Craig Armstrong's O Verona from the Baz Luhrmann Romeo + Juliet film, second, Abel Korzeniowski's Come, Gentle Night from the 2013 Romeo and Juliet film starring Hailee Steinfeld, and finally, Sergei Prokofiev's famous Dance of the Knights from his Romeo and Juliet ballet. Coincidence? I think not!
While Romeo and Juliet programs are a dime a dozen in the figure skating world--for example, note this post written by yours truly in 2012 discussing the Romeo and Juliet programs of the top three Japanese men at the time--the surfeit of similarities between the two programs, combined with the animosity between the two coaching teams, strongly indicates that Ms. Tutberidze and Mr. Plushenko's choice of Romeo and Juliet is far from coincidental.  Further adding intrigue into the mix is the fact that Alena Kostornaia--formerly of Sambo-70 and now currently among the ranks of the Angels of Plushenko camp--recently skated her own Romeo and Juliet long program during the 2018-2019 season, albeit with different music cuts.  Let's take a look at all three programs . . .
Read more »
Posted by morozombie at 12:52 PM 4 comments:
Email ThisBlogThis!Share to TwitterShare to FacebookShare to Pinterest
Labels: alena kostornaia, alexandra trusova, daria usacheva, eteri tutberidze, evgeni plushenko 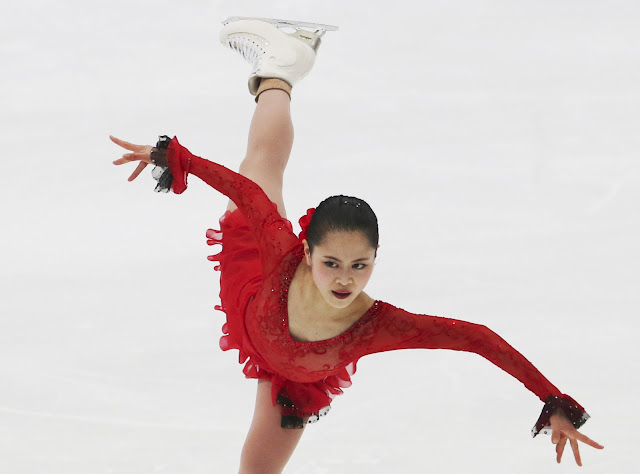 One of the most fruitful, yet strangely unheralded, artistic collaborations of the past few years has been the combination of Satoko Miyahara's skating with the choreography of Tom Dickson. For five straight seasons--from Ms. Miyahara's senior sophomore season of 2014-2015 to the 2018-2019 season--Mr. Dickson choreographed at least one program for Ms. Miyahara, with stellar results more often than not.

Ms. Miyahara's weaknesses as a skater are not unapparent even to the undiscerning eye: Ms. Miyahara's jumps are lilliputian at best, and her skating can be perceived as lacking in dynamism and power.*  To paraphrase Dick Button, Ms. Miyahara's skating is not the sort that reaches the 70th row of a 30 row arena.  But what Ms. Miyahara possesses in spades is a wonderful clarity of movement throughout her skating--a sense of precision in not only her carriage and posture but also her understanding of musical nuance.  Ms. Miyahara's strengths thus make her a perfect fit for Tom Dickson, who is known for his cerebral and detailed approach to choreography.